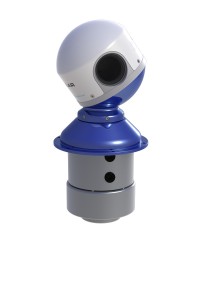 The RobotEye REN25 NAKED is an implementation of our RobotEye technology designed to provide a general purpose high performance two axis optical pointing capability for use in OEM and prototype systems. As with all RobotEye systems, the sensor or source is able to remain completely stationary while the signal is directed about two axes. The REN25 NAKED optical path components can be specified at build time to match your chosen sensor.

The unprecedented motion bandwidth of the RobotEye REN25 NAKED allows the following types of behaviours to be achieved with ease.

The REN25 NAKED can accurately follow predefined paths with extremely high accelerations up to 100,000°/s² and velocities up to 10,000°/s delivering unparalleled path following capabilities to a wide range of sensors and sources. Where precision repeated path following about two axes with your sensor or source is important to your application the REN25 NAKED provides an ideal solution.

Just as with predefined paths the REN25 NAKED is able to follow dynamically generated paths with the same unparalleled accuracy, acceleration and velocity as in the pre-programmed case and with the same flexibility to use the sensor our source of your choice. The generated paths can be completely arbitrary within the field of regard of the  REN25 NAKED. These paths are realised simply by streaming desired aperture angles to the relevant function in our RobotEye RE Lib C++ library. A good example of this behaviour is our inertially slaved REN25 option which provides a ready made off the shelf implementation where the REN25 NAKED aperture is slaved to the inertial sensor connected to the system.

The ability of the RobotEye REN25 NAKED to move rapidly and accurately between points with extremely high acceleration and slew speed provides unprecedented capability in acquiring sensor data from, or pointing a source at, points of interest within the field of regard of the REN25 NAKED. Whether a structured grid of measurements is required or completely arbitrary points are being defined by some input to the system the REN25 NAKED can acquire each designated point dwell for the required amount of time and move to the next point with unparalleled speed.

By setting the REN25 NAKED to velocity mode the full field of the system can be scanned at a wide range of rates in both azimuth and elevation. Applications of this mode include: scanning the environment surrounding a system for a given signal; mapping the environment surrounding the system in terms of a given sensor’s band of sensitivity; or even illuminating the surrounding environment in a controlled way. The REN25 NAKED velocity mode offers full control to be able to achieve these behaviours as required by the application.