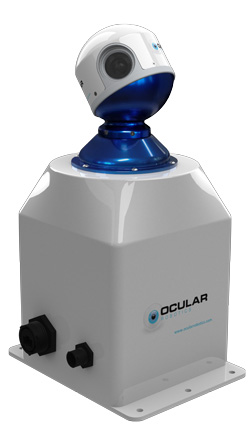 The RobotEye REV25 Vision is a two-axis high performance vision system with unprecedented motion bandwidth. RobotEye Vision systems are conceptually similar to conventional pan-tilt or gimballed systems in that they both effect the pointing of cameras about two axes, but that is where the similarity ends.

The RobotEye technology core on which the REV25 is based enables the view of the camera to be steered while both motors and the camera itself remain completely stationary. The implications of this are manifold and it means RobotEye Vision systems exhibit a number of properties that set them apart from alternative systems. In particular the following characteristics have significant impact on a wide range of common applications for directable camera systems, and the enabling of new applications not previously possible.

The most obvious way in which RobotEye systems differ from alternative systems is the motion bandwidth available to the user. RobotEye Vision systems significantly exceed, often by orders of magnitude the capabilities of alternatives in terms of speed and acceleration of the system aperture. With aperture accelerations up to 100,000°/s2 and very high aperture slew rates, not only are common behaviours currently undertaken by pan-tilt and gimbals systems able to be completed much more rapidly and efficiently but a whole new range of applications become possible, including:

While some pan-tilt and gimbals systems are capable of very accurate motion, none are capable of simultaneous accuracy and high speed. In contrast to this, RobotEye based systems are capable of moving with very high speed and acceleration while simultaneously delivering precision pointing of a camera’s field of view. This is because the RobotEye technology core addresses the central issue that limits the motion dynamics of alternative systems, the mass required to be moved to redirect the view of the camera.

Because the camera in a RobotEye Vision system is located on the system optical port and remains stationary at all times there is complete freedom to attach any C-mount camera to the REV25 that is needed for your application. Whether your camera is the size of a brick or a matchbox, 50 grams or 5 kilograms there is no difference in the pointing dynamics attainable with RobotEye Vision systems. Ocular Robotics is able to install a wide selection of cameras from the Allied Vision Technologies range or the user is free to install and use their own camera of choice.

Supply to OEM’s and integrators is an important part of the Ocular Robotics business and as such customization of our standard offering to meet the needs of particular applications or operating environments is central to our operations. Whether it is tailoring for operation in a particular service environment, enhancing performance specifications, altering the optical path characteristics or a complete ground up design for a particular application, all of these things can be achieved while retaining the trademark dynamic performance and other benefits of the RobotEye technology.

*** IP Rating valid only when supplied in an enclosure as shown in the adjacent image and both supplied power & optionally supplied weatherproof Ethernet cable connectors are fitted.

Specifications are subject to change without notice

RobotEye C++ Development Library — The REV25 ships with a fully documented C++ class library for both Windows and Linux that can be used to simply and quickly interface to the vision system enabling rapid application development for RobotEye Vision Systems users. The library provides access to the entire range of REV25 features and its reference manual is available from the Downloads page of the Ocular Robotics website.

The RobotEye C++ Development Library supports a range of motion commands, two of which are the building blocks for most RobotEye motion behaviours relevant to RobotEye Vision systems.

The SetApertureAngles command is used where it is required that the system aperture move accurately to point in a specific direction. Using the SetApertureAngles command it is possible to move the system aperture to over 10 distinct locations randomly distributed within the REV25’s 360° x 70° field of regard every second. If the pointing locations are compactly distributed such as in a grid formation rates exceeding 25 locations per second can be achieved. The motion enabled by SetApertureAngles is important for mapping such as when building panoramas, monitoring several distinct locations with a single camera system, tracking multiple objects and many more.