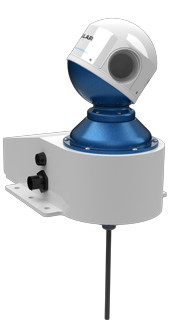 The RobotEye core technology on which the REHS25 is based enables the view of the spectrometer to be steered with simultaneous speed and precision while the spectrometer itself remains completely stationary. Ultrafast RobotEye hyperspectral scanners are the only spectral acquisition systems which isolate the spectrometer from its field of view, and in doing so enable applications which were previously not possible.

Your Choice of Spectrometer

The RobotEye ultrafast and precise pointing capability can be used to transform any single point spectrometer into an imaging hyperspectrometer. The spectrometer in a RobotEye hyperspectral system is attached via a fiber optic SMA connector and remains stationary at all times, giving the user complete freedom to attach a spectrometer perfectly matched to the application. Whether your spectrometer is the size of a shipping box or a matchbox, 50 grams or 50 kilograms there is no difference in the pointing dynamics attainable with RobotEye spectral scanners.

The RobotEye Hyperspectral REHS25 is an ultrafast hyperspectral imaging system, enabling large scenes to be imaged in short time periods. This has been achieved as a result of the unmatched pointing dynamics of the RobotEye across 360° in azimuth and 70° in elevation.

The RobotEye core technology on which the REHS25 is based, is the only technology on the market which enables the view of the spectrometer to be steered with simultaneous speed and precision. The pointing precision of the RobotEye gives the users the ability to pin-point the scanning, and to image down to a very fine spatial resolution without compromising on scan time.

The RobotEye Hyperspectral REHS25 connects to your spectrometer simply via a fiber optic SMA connector, all without the need for time consuming and costly modifications. Further, the RobotEye C++ Development Library enables straightforward integration with your application. Automation of the spectral mapping for any region of interest, at any desired spatial resolution, or even just the measurement of discrete points is easily achieved.

RobotEye REHS25 Hyperspectral has been built for all environments. The RobotEye core technology has a natural immunity to shock and vibration. Further, physical separation of the robust RobotEye scanning head from the stationary spectrometer allows for installation in even the most extreme environments.

*Does not include temperature rating of the camera used with the system
** IP Rating valid only when both supplied power & optionally supplied weatherproof Ethernet cable connectors are fitted. Specifications are subject to change without notice

The REHS25 ships with a fully documented C++ class library for both Windows and Linux. This library can be used to simply and quickly interface to the REHS25 enabling rapid application development for REHS25 owners. The library provides access to the entire range of functions available to the REHS25 and its reference manual is available to download from our website.

The RobotEye C++ Development Library includes a range of motion commands to support all user scan behaviours, the most relevant of which is SetApertureAngles. The SetApertureAngles command enables rapid and precise positioning of the system aperture at up to 25 distinct locations per second within the 360° by 70° range of motion. SetApertureAngles function allows the REHS25 to point with a spatial resolution of up to 0.01° in both azimuth and elevation. This function enables the rapid imaging of any region at any desired resolution.

REHS25 requires a 24 VDC power connection and a 100 Megabit Ethernet connection for control of the REHS25 scanning behaviour. Communication with and control of the REHS25 is achieved via the system’s Ethernet port. Full control over the motion of the system aperture and system feedback including current aperture orientation is enabled through the RobotEye C++ Development Library.